In the affluent global north, where fashion caters to every whim and vanity, shoes announce their wearer’s class, hipness, career choice, sexual availability, even politics (the clog versus the cowboy boot). It is disorienting, then, to be walking through a place where human beings—millions upon millions of women, men, and children—slip on identical-style footwear every morning: the cheap, democratic, versatile, plastic sandal of Ethiopia. Poverty drives demand. The only brand is necessity.

What meager protection plastic sandals offer seems superfluous on feet like these of Mohamed Haota, the cameleer. Photograph by Paul Salopek

Available in a limited palette of chemical hues—black, red, brown, green, blue, purple—the humble, rubbery shoes are a triumph of local inventiveness. They cost a pittance to manufacture. Any pair can be had for the equivalent of day’s field labor. (Perhaps two dollars.) They are cool—permitting the air to circulate about the feet on the Afar Triangle's blistering desert surface. And home repair is universal: Owners melt and mend the molded-plastic straps over wood fires. The ubiquitous sandals of rural Ethiopia weigh nothing. They are recyclable. Finally, modest as they are—the footwear of Africa’s poorest—few other shoes can claim their own war monument. (Soldiers on both sides of long and tragic conflicts between Ethiopia and Eritrea wore them to their deaths in battle.)

Our binary camel caravan—A’urta, or “Traded for a Cow,” and Suma’atuli, “Branded on the Ear”—has been joined at last by its two long-lost cameleers, Mohamed Aidahis and Kader Yarri. These men caught up with us from our departure point at Herto Bouri, crossing gravel pans and rumpled badlands after days of quickstep walking. In the manner of life here, no explanation was asked or given regarding the nature of their weeklong delay. They were late. Now they were with us. Each wore matching lime-green plastic sandals.

Guide Ahmed Alema Hessan (left) wears the “American walking shoes” he requested for the trip. But cameleers Mohamed Aidahis (center) and Kader Yarri eat up miles the way most rural Ethiopians do— wearing an ounce of molded plastic on each foot. Photograph by Paul Salopek

The surface of the Rift Valley is a palimpsest of footprints stamped in the dust by millions of cross-thatched soles of injected plastic. Yet if Ethiopia’s popular sandals are mass-produced, their wearers are not. They drag their left heel. They mar the right shoe’s molding by stepping on an ember. 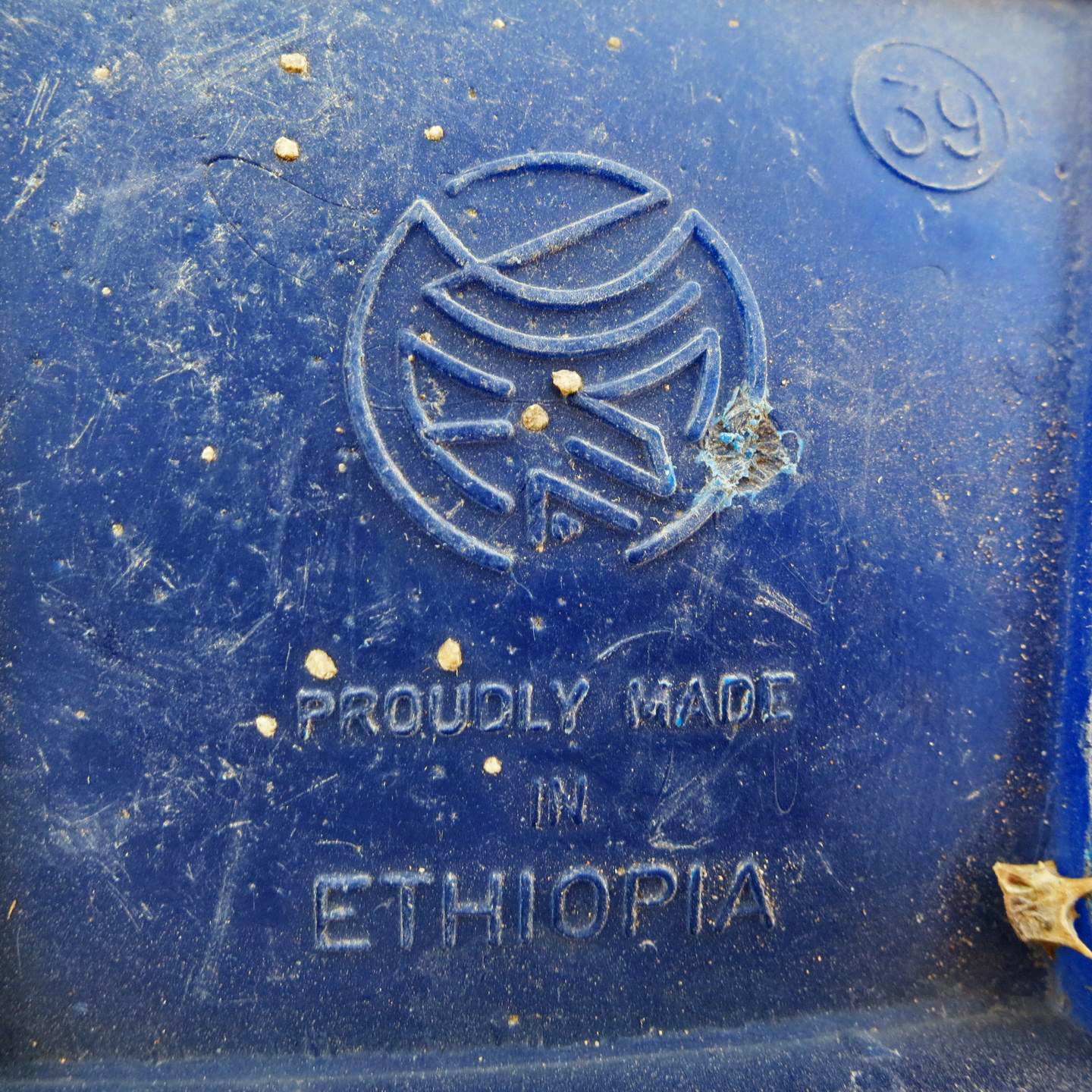 Imprinted on every footstep: One thing not made in China. Photograph by Paul Salopek

Ahmed Alema Hessan, our guide north through the Rift Valley of Ethiopia, knelt the other day on the trail, examining the shoes’ endless impressions.

Update Required To play the media you will need to either update your browser to a recent version or update your Flash plugin.